Someone recently pointed out that one of the reasons they love to work at Soundhouse is that they can track drums in a kick ass room with several different flavors to choose from.

In our dedicated outboard Mic Pre racks, we have 6 channels of Neve 1073‘s (two of em’ are vintage with EQ) plus an array of excellent mic pres on the Neve side of the spectrum including a pair of Chandler LTD-1‘s, up to 5 UA 610‘s ( I keep a UA 2-610 and the UA 6176 at home but I’ll bring it in for you if you ask!) for that world famous tube sound, and a pair of Great Rivers.

And of course, the renowned Trident 80B – which is the rare 40 channel input version.

And moving Mountains. Of Stuff.

For the next week or so Pickwick is going to be making some sounds at Soundhouse. Have you heard their recent releases? They’re full of lushness and not so common arrangements. Not your average stuff!

I think they’ll have fun here… 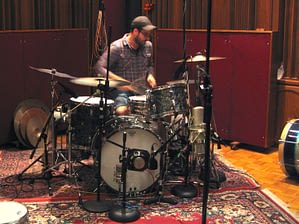 Getting some tones on the drums. The drum tech got these sounding sweet!

Kory Kruckenberg is the guy behind the console. 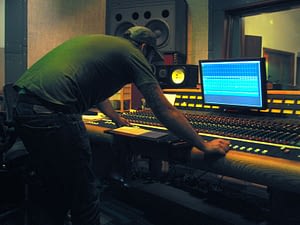 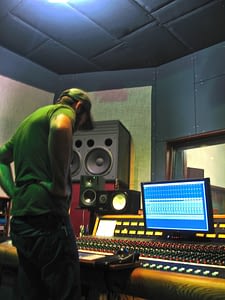 I learned that they have a secret code that they talk in, although I couldn’t crack it. There was talk of “small intestines” and “ears”, Genghis Khan and his “family”. Anyone know what they’re talking about?

Somehow, I cant remember really, I came across an email that said WSRP and I, uncharacteristically, clicked on the link.

Interesting, I thought. Maybe I should go check out whats going on here. Its a two night Rock Party at the Skylark in West Seattle, featuring Seattle bands. Seattle rock bands.

Scrolling down the band names I saw, near the bottom, Skunk Rider, a band that’s coming in to Soundhouse soon, to record. Below that was Lark Vs Owl – I’ve recorded them a few times and we’re working on their new stuff now (So far everything’s going to tape).

Skunk Rider opened Friday night with a wall of fuzzy rawness: yep, this’ll be fun to put to tape! (Yes, tape.) Then Crawler set up. Another band that’s been through Soundhouse with Jack Endino – and those guys were awesome. All in all, Friday night was a hard hitting night of serious Rock!

Saturday night was really good too, but not quite as hard/edgy. There’s good rock in Seattle! Everyone was excited about Mind Vice, but my favorite of the night was Lark Vs Owl. They just have good songs, good presence and a good show. Luv ’em. They’ll Luv ya back.

I want to put a special THANKS out to TBASA for putting this show on and supporting Seattle’s rock music.

That’s all for now….

Something is happening here in our little corner of the universe. Something, yes. You may know about is already, but you haven’t heard it … yet.

Playing with Strangers is an idea, a workshop, an experiment that takes place at Soundhouse.

It’s an ongoing and ever-changing landscape created by it’s inhabitants. Inhabitants that happen to be musicians (and maybe other type of artists as we move forward) that don’t know each other [are meeting for the first time]. They are brought together for the purpose of creating or altering the landscape.

Every month or so, a new group of artists convene at Soundhouse for a short time to write, record and perform about an EP – all in roughly a day. They end up with studio versions created during the day and “live” versions performed that evening in front of an intimate audience of friends and fans.
The recording will be produced and available as a digital EP – one for each session.

Well, now. You have been introduced. If you’ve been experienced …. or not …. you may have until tomorrow to download, for the sum of $0, Session No. 2.

Thank you and good night.

More and more, cool bands are coming in and rocking out. Are we having a resurgence of, dare I say, Good old 70’s R&R?
Custom recorded and mixed their upcoming album a little bit ago…

You can find more pictures here:

In Orange and Ashdown, Cymbals and Sticks

In the name of Kool Stuff For Katie

And they made Rock.

With Steve Fisk at Soundhouse.

That last post was number 53. Herbie the love bug’s number. It was a long time ago but I still have fond memories of Herbie.

In this age of internet laden devices that you can take practically everywhere, land lines seem so, well, archaic. And since we haven’t used our phone here accept to delete sales call messages, we decided to just cut them off at the pass and get rid of the land line.

You can still get in touch with us through the Contact page on the website, which was and is still the best way. And we still have internet access and Wifi.

So, the next time you’re in Soundhouse, you can enjoy even more privacy and focus.

If we were in Dune, that’s what the question would be. For now …  in this blog anyway. What would it be if  … we weren’t? Gravity and Happiness? Grass and Ultimate? Space and Time? Fear and Love? Bottled water and “Corporations are people”?

A couple of clues I am able to share with you:

The Sonics were in this summer recording their new album (Welcome back to Soundhouse , guys!) with Jim Diamond producing. Jim tracked and overdubbed everything to the 2″ Studer. I was able to be there when they were transferring THE COMPLETE recording (all of the overdubs, everything were done to tape. Of course, not that spectacular 30 years ago, but it just goes to show that they are dedicated the the sound and authenticity) to protools for mixing. Sounded great! Jim took the files home with him to mix ….

A band without a name, pulled together by Stefan Moulvad of Denmark and “The Sandmen” came to Soundhouse last September to record an album. When I was first contacted by Mr. Fisk for booking, I thought he told me the band name was,  “Overthere”. Upon meeting Stefan, he had never heard the name. No matter, it’s the music, Mac!

Stefan told me he put this project together with some Danish government funding, I believe, and had met Oh My Darling at a festival. Apparently he asked about where he should record in America, and within a minute and a half he’d decided to look up Steve Fisk. And so, Stefan came to Soundhouse with his drummer, Silas Tinglef and soon after, Oh My Darling (Check them out!), hailing from Winnipeg.

When you get this much talent in a studio, good things are bound to happen!

Really looking forward to the release!